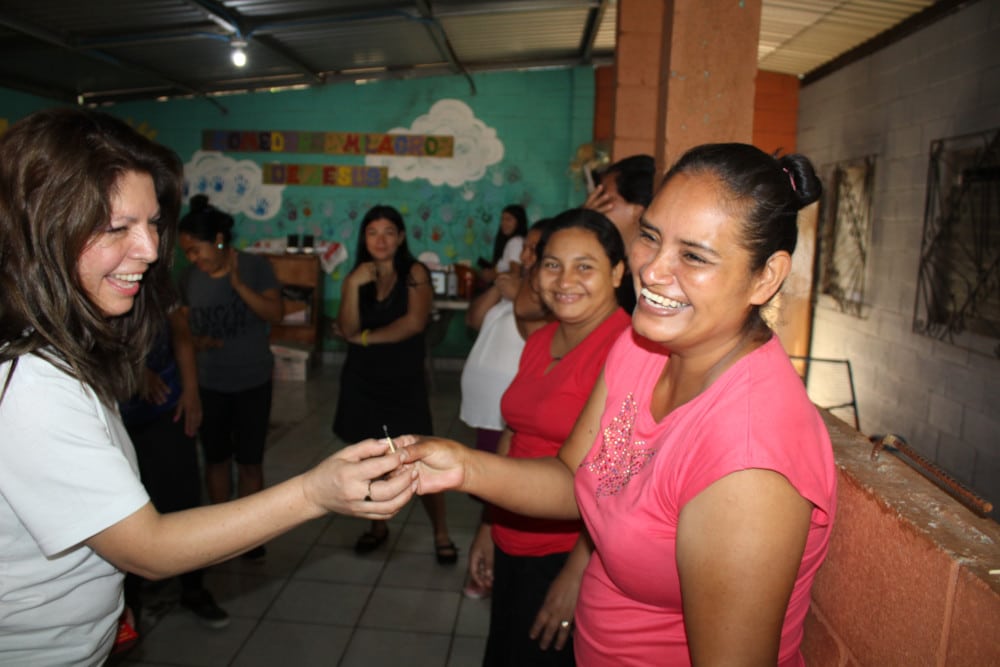 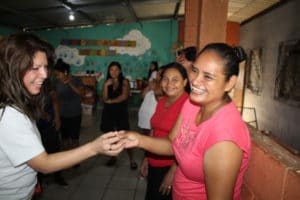 Sandra is a woman, a mother and an entrepreneur, and although like many women in El Salvador, she has never attended formal school herself, she has taught us so much in her time with the Women’s Empowerment Project (WEP).

Having worked since a very young age, Sandra has been making and selling pupusas and tortillas for the past 15 years. She has also owned and run her own business for the past five years. We met her in 2019, when she started with the WEP, at her small stand on the edge of the main street in the community of El Cocal, La Javia.

Sandra lives with José, her partner, and her children in a house that she describes as “temporary.” It is a home they built themselves, with sheet metal and wood on a rented portion of land. They have no connection to electricity and, like those in the surrounding community, receive water only every three days and must be careful to make it last. Sandra’s dream is to one day have a house of her own for herself and her children.

Before COVID-19, a normal day for Sandra would begin at 4 a.m., and start with cooking corn and making breakfast for her children and José. After breakfast and once the corn was ready, Sandra would go to the mill and then to her stand, where she makes tortillas. She would carry a griddle and a 16 lbs gas drum, all before 10 a.m. to begin making tortillas by noon. When he wasn’t working, José often would help.

The process was repeated in the afternoon, every Monday to Friday, and while she was tending her stand, Sandra would ask her partner to purchase ingredients for the following day. On the weekends, Sandra would repeat the process and also prepare, from scratch, the cabbage salad, tomato sauce and fillings for the pupusas, which she would then sell on Saturday and Sunday afternoons. Once everything was ready, Sandra’s day would finally end and she would head home around 9 or 10 p.m.

In addition to all that and without fail, every Wednesday, Sandra would attend the workshops for WEP. Despite limitations with literacy, Sandra always found a way to keep up with activities.

Sandra notes, “I always ask Gloria or Flor if they can write explanations of the topics they do in the workshops. So later, when I get home José reads it to me and we talk about it.”

The first days of joining the program were difficult, as expressed by Flor, the WEP coordinator.

Flor stated, “when I met [Sandra] she was very quiet. It was almost impossible to get more than a one word answer out of her. It’s a challenge, I thought. But she is always very attentive and knows the answers when asked anything.”

After the first year at WEP, it was time to apply for seed capital. Sandra had the opportunity to think about what she needed most for her business to grow. “I want a refrigerator,” Sandra said. The staff were confused at first and wondered how useful a refrigerator without electrical connection would be.

Sandra thought it might be a challenge, but said “If I have a refrigerator, I can save more materials and go to the market less times. I can also prepare beforehand without exposing it to ruin before selling.”

She had all the plans clear in her mind, including well defined steps of what she wanted for her business and her life. Of course, plans changed when the COVID-19 pandemic hit El Salvador in March. The restrictions made it impossible for Sandra to maintain connection to electricity in her home, which meant the refrigerator, which she had dreamed of and planned so much with, could no longer run.

Despite the hiatus and changes, Sandra has adapted. Due to instructions from the mayor’s office, she cannot sell at her stall. Now, in the backyard of her house, she makes tortillas once a day and then in the afternoon she prepares pupusas and her new product, typical snacks. In addition, they also offer delivery.

Sandra states that “these decisions were not easy to make, but the knowledge I have acquired at WEP has helped.” Through those skills, Sandra notes, “I have learned to organize my expenses. We write down everything we sell and spend. With this, we know how we are doing with each product. We learned that tortillas need more effort and were not making much profit, which caused us to do something new.”

According to the Project staff, Sandra has changed a lot in this time. Flor states that Sandra “now has more confidence to speak up and give her opinions. She has always been clear about what she wants, but now she expresses it without fear.”

Gloria, project psychologist, remarked that Sandra’s goals go beyond the material in the program. She stated that

“when you talk to Sandra, you see signs of empowerment. For Sandra, a refrigerator meant no longer depending on someone else to do the daily shopping while she runs the business. It is independence.”

Sandra’s perseverance, positive attitude and initiative inspire us and remind us that many limits are in our mind. It is amazing to see how new skills and tools, as well as designated time for business development, can help to empower women. In the WEP participants discover possibilities that they had not considered before. Support more women like Sandra now.